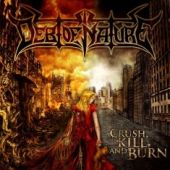 This opens with a pretty classical influenced introduction and proceeds into a Death Metal showcase. The style is varied enough to avoid being generic and held together well by some solid performances. The structures have a lot of twists and turns throughout their length. There’s a combination of melodic and a punishing approach to give them a distinctive enough sound. There’s a Thrash influence to be found as well. Regardless, the band displays a ferocious mindset that is sometimes put into compelling effect and other occasions drags a little bit.

The style they play is somewhat technical, but also more straightforward than a band like Nile performs. It has punch, however, and there is a scathing display of riffs to be found. The performances to be found are quite competent, but not overwhelmingly amazing. The band is tight and efficient in delivering a relatively constrained style to the table, though they may not have the most original standpoint the listener has ever heard. The album maintains a relatively consistent quality and doesn’t have many complete standout moments. 'Like Breeding Rats' has a slightly more acrobatic display than other tracks on the disc, however.

There also isn’t anything particularly noteworthy to be negative about with this outfit, though they do sound uninspired at times. The album at times reaches a crushing intensity, but Debt Of Nature never up the ante a couple more notches like I believe they could. Regardless, "Crush, Kill And Burn" is a very good release, though it falls short of being phenomenal by quite a margin. This is recommended the most to fans that can appreciate Death Metal to its fullest extent.