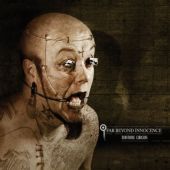 Type:
Release Date: 2009
Label: Self Released
Genre: Groove, Thrash
1 See You In Hell
2 The Day I Try To Die
3 Devil In Your Fairyland
4 Two Minutes Of Hate
5 Ministry Of Fear
6 Green Fuckmachine
7 Brainsucker
8 Pigmy Headhunters
9 Enemy
10 Immortal Man
11 As One

Originality cannot be taught or even bought, you are either blessed with it and use it wisely or you need to do something else. That is the black and white basics of life, for those who live in some sort of pink-sky fantasy world. That said, lets jump into the metallic realm of Austria’s Far Beyond Innocence.

The main two men in this band (Vermes on vocals, Godfather on guitar) have been a staple in the Austrian metal scene for years in many bands. So it is only right that they represent that scene with what can be described as original power and passion. They use what they have done in the past, to make a template for metal’s future, not to mention world domination.

With heaviness and aggression and a knack for amazing lyrics, FBI attacks you with everything they have and they do it with brutal power and intensity. Songs like ‘Devil In Your Fairyland’ and ‘Brainsucker’ show that musical quality, thundering heaviness and humour can incorporate with having massive amounts of talent and intelligence that cannot be ignored... nor should be. This is clearly a benchmark for anyone else to strive for what they are forging.... fun and heaviness.

Far Beyond Innocence are true metal and pure originals as well, what more does the world need other than to buy this album for themselves. Perhaps those people should buy two copies so they can give one of them to a disadvantaged metalhead. Even they need to hear this amazing CD.