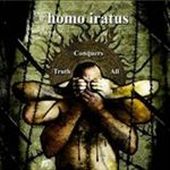 Greek Death Metal has been some of the most brutal ever forged by the hands of mere mortals. It is known for it destructive power and its outright snubbing of the mainstream metal to create things that are it’s own. I love musicians who can do that, and back it up with quality music.... just like Homo Iratus.

It is true that Homo Iratus is not very technical, but their ability to execute their music with major power while having so much melody make up for it with. Sadly... this is only a four track EP, which as people know, makes me want more. Being that this is a EP, and having this overly simplistic approach to the recording - brings my rating down somewhat, thankfully I still love it though, and my ratings go up in other areas.

There is a report that Homo Iratus have broken-up at the time that I write this. I hope that this report is just nothing more than speculation. These guys have found their way into my playing rotation and that is hard in the first place. I hope that the band are still together because they owe everyone a full album. This is just a tease for my metallic pallet. I hate being teased, but I will wait to hear more.