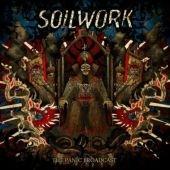 Soilwork's overall melodic death outputs have been solid. Their last release that I heard before this one was A Predator's Portrait and that remarkable album will remain their best for me, I think. When I first listened to The Panic Broadcast, I wasn't very impressed. However, on repeated listens, I've been able to appreciate it a lot more. It just took many spins to get into it.

The guitars are tuned down a few steps and are mostly chunky mixed with melodic parts. "Speed", their vocalist, sings hoarse throat alongside the heavy rhythms, but meshes it with well the melodic parts. There are clean bits with the guitars and some keyboard action. The melodies were hard at first to get into. All of the rhythm guitar sections were solid and thick. They are catchier the more you listen to this. I was hoping that the riffs would be more intriguing like they were on A Predator's Portrait and it did happen for me after about 5-6 listens. The songs are about 4-5 minutes in length and all of the tracks were filled with constant wages of superiority. Again, rhythms were very well thought out, they didn't sound very bland. The chords feature that heavy/chunky guitar with melodic pieces that were quite memorable.

There were only a few leads by Sylvain throughout this album. They were pretty well orchestrated, but just not enough of them. The rhythms overpowered everything. As much as I tried to enjoy the music on here, it simply did take quite some time as I previously mentioned. "Speed" got on my nerves at first but the guitars and overall great melodic death superiority prevailed. I really got what I hoped for which was like their older more classic outputs. Another good thing that occurred here was the mixing. The guitars and the rhythms  were well heard throughout, however, I did have trouble hearing the bass guitar, it could've been louder. The drum bits were well orchestrated and the vocals were a little over the top an they kind of drowned out the guitar riffs. They were a bit too dominating.

A long album featuring 10 tracks calculating at about 47 minutes long. These melodic death metalers really filled my vigilance and I'm urging that everyone that is into melodic death should purchase this. I've noted that throughout this release, the vocals were overpowering but rhythm guitar blatantly worthy of praise and the overall worth did hit home with me. Best to purchase this ASAP if you want to hear dominating melodic death!

Like a fine wine, most bands lucky enough to be around for many years get better. Some wines though turn into unpalatable vinegar. It is a crap shoot in the music world to go on the path of doing this for a living... one that all bands go through. Soilwork has been around for 15 years... what do they have to offer now? Read on.

Back in the day, these Swedish metallic monsters were some of the best Death Metallers around (check out their first three albums, if you have not yet). With complexity and musical brilliance of the members and also led by a vocalist that was at the top of his game they were the ones to beat. Sadly, this once mighty band has fallen from that great height - and I cringed when hearing that sickening splat at the end.

From making some great Melodic Death metal to now doing a disappointing combination of Metalcore and Modern Rock Soilwork have sunk into a pool of averageness, and disappeared below the choking waters of bland and tasteless music. Songs like the lackluster 'The Thrill' to the all too predictable 'Let This River Flow' show a band that is caught in the commercial trap, and all the life has be sucked out of them as they not once tries to break free.

Even vocalist Bjorn ‘Speed’ Strid has been reduced to this weak shell of what he could really do. The mighty have fallen, and fallen hard into a vortex. I know some of you love this band now... after hearing "The Panic Broadcast".... Why? People: pick up their first few releases, then you’ll understand my total confusion with the band. This album cements them as the commercial sell-out kings, yet I hope that the band will turn back to their roots and make great music once again.

I am a optimist at heart, but even I am not holding my breath for the turn-around for this band.