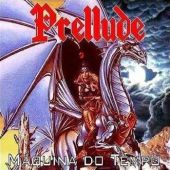 I have a soft spot for bands that just do what they do clearly for the pure fun and enjoyment of it. Don’t get me wrong, I love bands that have a strong social consciousness or political leanings and even when they have some sort of agenda but I started in bands based upon the commandments of sex, drugs and Rock ’n’ Roll - exactly what metal was founded on. ‘Fun’ simply consolidated all of that into one term... my favourite three letter word (except for the ‘S’ word).

Brazilian three piece Prellude are a throwback to metal’s more simpler times. Straight ahead and uncomplicated, this band reminds me both in power and simpleness that metal use to be. Shades of Motorhead, NWOBHM stalwarts Raven and some early hints of the whole Punk/Metal crossover also comes through ( something like D.R.I and early C.O.C as well). Simple, yet effective.

The two drawbacks are that the entire lyrics are in Brazilian, and the production kills the power I know this trio has. The latter really is disturbing, as the whole album loses much of its punch, and comes across as almost nonprofessional. Having a proper producer and a good studio to work in would be the place where Prellude could vanquish the bad sound an obtain greatness. The language thing poses only a small problem... but is not the glaring problem.

Prellude is just fun, and that is it. They are not going to be the next thing in metal, they are enjoyable to hear and would be easily forgotten soon after. With the right recording and better direction, they might be seen in better light than just being a cheese filled trip into metal’s history. Right now, that is all it is - cheesy -(and not the good kind either).