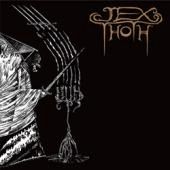 Although I’ve never been drunk I would compare the effect of this album as, perhaps similar to being in an absinthe-induced state. This is simply… something else- something conscious-heightening yet warmly pleasurable and easy. It’s a melancholic journey with syrupy, trailing vocals and organ that carries on with a steady, strong pulse and palpable presence. If you’re unfamiliar with Jex Thoth’s sound, these over-used, cliché adjectives will help you out: hypnotic, psychedelic, “retro”, doomy…

Jex Thoth’s interpretation of Slapp Happy’s 'Mr. Rainbow' is just… monumental. I don’t know if that’s too great a word to describe it but it’s probably the closest one. Heavy, drowning, and utterly transformed… it hit the spot in a spot I never knew existed! These melodies taking form in Jex’s vocal style was pure magic! It is no doubt the “best” track on this three-song MCD, but that is not saying too, too much.

“Witness” made me go back and get their old stuff. I was psyched when I heard Jex’s vocals before, as I’m totally bored and SICKENED by what’s available in this massive genre of heavy music... for this chic can actually SING for fuck’s sake, not moan like a bitch that’s about to disintegrate into pieces at the hint of a breeze. This is so fucking refreshing and acutely relieving to me that I can say without shame that I have very naturally developed a well-deserved girl crush, which coming from me, says a fuckton.

“Witness” hints of the heavy, massive storm clouds that lie ahead as I eagerly welcome the drowning, purifying experience of the upcoming full-length. The accompanying visual intoxication is, once again by the lovely Sami Hynninen.