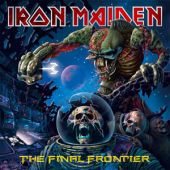 In the history of metal, no other band has been more celebrated, revered and respected as England’s Iron Maiden has. How can I, a lifelong and rather rabid IM fan, ever write a review on one of my all time favourite bands and not be bias as all hell while doing it?. Easy, all I have to do is crack open a cold beer and hit play... the rest will do itself. I will be as objective as I can be.

"The Final Frontier" is the Irons fifteenth album. Showing that metal has staying power like no other genre of music before or will ever be. With inexhaustible class and musical power that has never faded with time, The Maiden lads have released an album that is so intelligent and still very powerful in a way most bands could only have wished they had the talent to do while staying true to themselves. It shows that legends are always above mere mortals, yet still mortal as well.

From the straight ahead power of the first single, 'El Dorado', to the massive sounding 'The Alchemist' they do not sound like a band that has been around for 15 albums. It actually sounds impressively fresh, undeniably dynamic and as usual pure metal. They show all of the younger bands how to do it once again and make those who thing they are not relevant any more eat their words. Metal needs substance to be relevant... and Iron Maiden constantly show that they are still as relevant as ever.

It is a testament to talent, ingenuity and just plain stubbornness. When a band has been around for this damn long, they are something very special. Iron Maiden have all of this and one thing else that 99.9% of other bands never have... it is truth in one’s self. Through all of the years, The Irons just stayed true to themselves and their music. That makes them who they are and I just have one last thing to say to that.