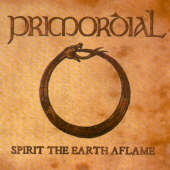 I have always liked a band that strives to improve. It seems that if a band has the will to move beyond what they’ve accomplished already, they’re more enjoyable and rewarding. Such is the case with Primordial and their third album “Spirit the Earth Aflame”. After two albums Primordial has now reached a new standard for themselves. “Spirit the Earth Aflame” is the culmination of the past, and Primordial has taken full advantage of themselves, creating what will be the first album that they have their own unique voice on.

Primordial layer their songs with many details, ranging from underlying guitar tones to keyboard melodies. The layering does everything from making a simple chord progression more interesting to building the sections up, or even to grabbing the listener’s attention to the fine detail. Atmosphere makes its appearance known as immediately as it can, from the second the album begins to fade in from your speakers until it fades out. Primordial create a sound that is along the lines of “Hammerheart” era Bathory in terms of atmosphere: extremely ostentatious and epic, yet not to pretentious for its own good. Further down Primordial’s music you’ll find that vocalist A.A. Nemtheanga creates quite a line of diversity in his performance. From his nearly spoken vocal passages, to black metal shrieks, to his grandiose singing, all of it fits the music extremely well and never comes across as tasteless. To complete everything, the band puts as much of their heart into their music as they do with their Irish heritage. Their music is on a very personal level and you feel that when you listen to Primordial.

Bottom Line: Primordial has now found out how to utilize their ability to make well thought out, excellently composed songs that offer an amazing atmosphere as well as great musicianship, all on a very personal and unique level. Check this one out.