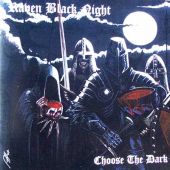 Australia is a place that metal is alive and kickin’, yet it is so much different than the rest of the world. I believe that this country might be the next nexus point for metal, where the newest thing will explode out of and reign supreme. I love many of the acts from there, and this one is no exception. The name is Raven Black Night.

I was shocked as the CD began. It was as if Black Sabbath and Candlemass have had a bastard child and it was recording in a studio somewhere ‘down under’. These are two of my all time major influences, both in writing wise and playing and it was glorious for me to hear. The singer sounded almost exactly like Messiah Marcolin did (Candlemass) and the music was a pure concoction of Sabbath sludge and the ‘Mass boys droning power. It was cheesy imitation I admit but I got the impression that was what they were going for.

I normally hate people who build a career around sounding like someone more famous than themselves yet in this instance, I really don’t mind. The guitars are so melodic yet heavy as lead and the bass thunders out at you. I was in pure metal heaven. Songs like the spacey yet heavy ‘My Love Is Holy’ and the epic ‘Blood On My Wings’ are just amazing. They may be just paying respects to their heros, as they do sound a lot like the bands I had mentioned but who cares?

It is true that they are playing like Black Sabbath and Candlemass but they are not ‘ripping them off’ either. This is the only time I have condoned acceptable imitation of anyone but it has been done only for fun and reverence. The band does not try to pass themselves off as anything but making a little music like their heros and having a grand ol’ time while doing it. I have a word for a band that does this out of the pure love of it- Respect! It may be the only exception I ever do when someone plays like this.