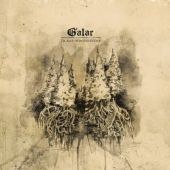 Another Norwegian Black Metal band arrives and I was interested instantly. In the realm of Black Metal, Norway is the place to get it from. Ushering in from the BM capital of the world comes the two man Black/Folk Metal tour-de-force Galar.

This two man operation stands out like no other I have come across. Along with the hellishly heavy guitars and death cold vocals, they use an array of different (not regularly used) instruments. A demonic bastard spawn of Symphonic Metal ,Black Metal and Folk that consists of bassoons, violins, grand piano and even a cello – together making this original yet fiendishly heavy music that literally makes you need to take good note.

The fact that it is sung entirely in their native tongue, might have made this hard to listen to... that assumption is wrong. It does nothing to limit the darkly imaginative and wickedly strong music, actually adding that bonus of sheer aggression as the language makes it all seem that much more nailing heavy. You do not need a translator for that.

I think ol’ Beethoven might have really enjoyed the mega-talent that Galar has, not just because they were loud enough that even the long dead maestro himself wold be able to hear these guys through his profound deafness. They are a fresh whiff of darkness in the biggest way. Talent like this is good to hear.

With ability, originality and heaven shaking heaviness like this I think there are new Black Metal kings on the horizon. All hail Galar. Horns up to thee, minions of the darkness. This is a band to watch for.