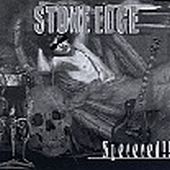 As I have said earlier in another review... Japan has a really rich, if not a very peculiar history in the field of metal. The Japanese metal scene are distinctive with their own brand of music no matter what genre it is, and I for one love the variety that they deliver with heavy goodness.

Stone Edge has been in existence since 1991, and have many demos to their credit not to mention they also have two full album and three singles besides. I have not heard any of them personally, but here is the CD single called "Speeeed!"... first thing I am hearing. I gotta say that it was... interesting.

They labelled Stone Edge’s music as Power Metal, and I can see that to a point, there are also more to explained. They have some of the qualities of Power Metal, yet there is a feeling of the dreaded Grudge woven throughout the two tracks. They seem to be great musicians and are more than capable of thrashing quite hard, but it seems that they just cant get the car out of first gear. I hear the music wants to explode... but it ends up being a very wet firecracker, and fizzles quickly. It’s good, but that sense that it wants to be bigger stops the enjoyment factor cold.

Stone Edge is a great band, or tries to be. They need just to let go of whatever it is that holds them back. BLAM!! You’ll have a band that could be bigger than Godzilla (meaner too). As it is, the single is promising but never delivers. I hope to hear the album this was promoting because I hope it does not disappoint as much as these two tracks did.