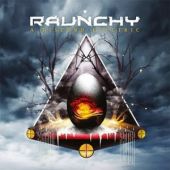 While the first song did not really “grab” me per se, the remaining 11 on this album have yet again proved that Raunchy is more than capable of successfully merging completely different genres of music and making them into an easy-flowing album of awesomeness, rhythm and energy. I can fairly say that “A Discord Electric” is a true-to-current Raunchy album. I had a chance to listen to it numerous times while driving – and it is FUN. Acceleration comes naturally. Well-put-together, with seamless transitions from fast-paced, hard-hitting sections into choruses and melody. Entertaining; well-tuned; addictive. You find yourself tapping your foot to the rhythm of the drums; the melodies stick with your throughout the day. Every instrument has its place, has its moments, and has its purpose. The vocals are ab-freakin’-solutely great – arranged with the music to flow effortlessly, in certain moments almost making the songs 3-dimensional. Considering Raunchy’s previous albums, this may be a little more pop/radio-oriented, but, truthfully, who isn’t nowadays. I think it is a little different than “Wasteland Discotheque” or “Death Pop Romance”, a little lighter, faster. Songs are diverse, yet all of them have details in common. However, I did mention the fact that the first song did not really do “it” for me, and I need to explain: ‘Dim The Lights And Run’ is a good song; it is not an album opener though – being long (5 minutes plus), and maybe, just maybe too monotonous. As soon as that ends though, it just gets better with every second – the pace picks up, pulse quickens, and off you go.

Is it something new from them? No. But if the challenge was to make their music more creative and unexpected than it already was – I think they really pulled it off. This will be on my playlist for a long while, well, along with the rest of Raunchy releases. If you’re looking for something undemanding to unwind to – give this album a try.