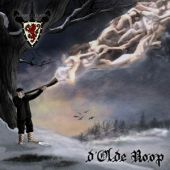 "D'Olde Roop" is Mondvolland's first full-length release. They are a Dutch band self-described as "Folkloristic Black Metal". That it is.

This album has an organic sound with competent musicians and very active basslines. The vocals are nice and gritty with good power. There is occasionally some singing, and bits of everything that you would find in Folk Metal such as flutes, fiddles, primal screams, sounds of fire, and spoken word- all suspended in a base of Black and Heavy Metal. Though their sound fits perfectly in the confines of the "Folk (Black) Metal" genre, one can hear the uniqueness of their musicianship, notably in the guitar and bass-playing, and the interesting interplay between the strings on certain tracks. The music is often "festive" without that "drunken" feeling many Folk-Metal bands tend to take on (the vocal lines on 'Hoefslagen In De Verte', especially the verse, is an example of this mature, musical "sobriety"). The clean vocals here are a strong point that would definitely be worthwhile to develop.

For me this is all too much topping for my pizza as I find the 'concentrated' lack of profusion meaningful, however if "more is more" for you, and you're into Folk Metal and bands like Korpiklaani, Metsatöll, and even Vintersorg, you would be wise to check this band out. "D'Olde Roop" is not skimpy on the "folk".

Blackened Folk Metal has always both puzzled me and yet made me excited. How can something so unusual sounding be this heavy and unforgiving as well? That is a question that resonates in my head yet it does not bother me. It is all different, yet it makes the style that much more powerful a thing that makes me love it despite the unusualness of this newer of metallic genres.

Mondvolland reminds me of the band Myrkvar from the Netherlands or even Finnish Verjnuarmu. Even though both are closer to being Viking styled metal than this band the similarities are striking. Strong folkish roots with traditional instruments match up with powerful metallic guitars that accent one another, and create that perfect mix that so many bands never seem to end up getting.

The language is not known to me, but that does not detract from me enjoying them. They are a band that has copious amounts of talent not to mention that they make some very interesting music that sticks in my mind long after I click the off button. It is that sort of thing that makes me forget that they are not speaking a language I know and just lets me have the pure metallic pleasure ride anyways.

The language barrier might stop some from listening to them but I urge anyone who loves strange yet monstrously heavy music to give it a try. I have a hunch that if the listener does, they will get the same appreciation for it as I did. Music is a bridging point for everyone you don’t have to understand to understand in a different way.