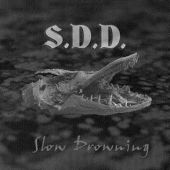 I love getting a new release from a band I had reviewed beforehand. Seeing if the band had a musical growth or if they ended up being somewhat a complete and utter tragic collapse is pretty much what I live for. S.D.D. is one of those bands that have come around for another time of picking my brain. Lets see if the band swam or sunk like a stone.

I had originally written how amazingly fun this band was. Crossed between old styled Punk Rock like the Dead Kennedys and metal in the vein of Motorhead, they are not what you would call a technical sort of band, but they great at what they do. Passion added in with a good amount of fun make a band just plainly enjoyable. Plainly put this band really does show that you don’t have to be axe-slinger gods to make some great music. Now as the two song CD single plays in the machine... the proof is in the pudding, but the pudding is spoiled.

The track called 'Atheist' starts off, a raucous sort of riff, that is not very original. It is catchy for a moment or two, but it lacks the spark they had on their previous release and becomes boring real fast. 'Hangman Blues' is a good song, but hardly ualifying as their best. It seemed that instead of going forward, they kind of lost both their way and fun. Gone is the old school
Punk and Motorhead things... now it is just bad Punk.

Hope the rest of the album when it comes out is way fucking better. If this is any indication, it will not be good. And for my original question... the answer is- they sank like a stone and drowned here, deciding not to swim a stroke. Sad!. On their first release that I had the pleasure of reviewing, they were amazing and fun, but not here. S.D.D. have turned into a band I do not want to hear anymore.