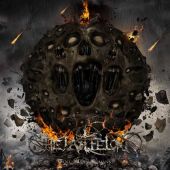 Type:
Release Date: 2010
Label: LifeForce Records
Genre: Death, Technical
1 We Are Future Housing Developments For Maggots
2 Too Many Humans
3 No One Would Notice If You Died
4 Do Not Defend Me
5 Quandary
6 Most Unclean
7 Overrated Existence
8 Televisionary
9 Water Cooler Suicide
10 A Cathedral Of Flesh And Fluids (Bonus Track)

I have always happily said that Canada has been making strides into the metal market for years, and now people see that they are kicking some major ass all over the globe. With strong musicians and a growing scenes and record labels who are now discovering talent in their own country, it is no wonder why Canadian metal has become more than viable.

Quebec based The Last Felony is technical Death Metal to the tenth power in the vein of Carcass, Bloodbath and Gorguts that has some shading of both Black Metal and Deathcore added in for good measure. They pound you with detonations of insane drums accented by berserk riffs that strengthens the already amazing hate-fuelled vocals. Add in varying arrays of tempo changes and aggressive low end rumblings, you have the setting of an album of some impressive metal.

As Death Metal goes, The Last Felony are extremely good and nailing heavy, but they actually lack some sense of originality. It hurts to hear that such talent has not been used wisely, but it only hurts them to a degree. The simple fact that they deliver their metal really heavy-handedly, makes up big time for the lack of original styling.

The Last Felony remind you that extreme metal is delivered with the power of a H-bomb and with unrelenting malice. I am glad that The Last Felony are good. I only hope that they keep growing, and find their own path. If they can successfully find their own brand of Death Metal the world will jump on their bandwagon with horns held high and their beers even higher.