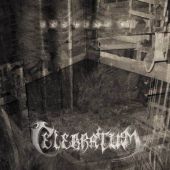 The Norwegians seem to have cornered the market on the Extreme Metal scene. So many of today’s extremes of metal, mostly in the Black Metal variety, is born of blasphemy in the frozen cold of the many fjords only to be then exported from there to our shores. Something I am happy to accept. On the latest satanic voyage from the bleak shores of the Viking homeland, rides one called Celebratum.

I have heard many BM bands, but this one really did end up making me really pay attention to them. Powerful riffs and blast attack drums are amazing in its acrid strength, but it is how the vocals are recorded that rose Celebratum above the others. The vocals were harsh and brutal, invoking the image of Satan himself, pinpointing the weak for damnation. Truly, they were the evilest vocals ever made... and I have heard Venom live six times and enjoyed the first three Bathory albums.

With such evil tracks like the insanely brutal 'Death-Gate' to the soul burning riffage of 'Mirror Of Suffocation' it is clear how wicked they are. Never in my life have I ever heard such a collection of black masterpieces. As the vocals lead you down into the many levels of pain and endless torture that Hades has to offer up. It is a place where even Jesus himself, would never travel and angels burst into flames.

With amazing production and strong songwriting, it shows that today’s Black Metal has an infinite amount of talent. Celebratum is Black Metal version of the ‘next big thing’. I for one revel in their malevolent rise into the world. I will look forward to hearing more from them... much, much more.