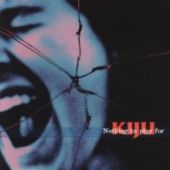 I got to review this bands latest first, thanks to my own stupidity (did not notice the dates of release), but this little ‘oops’ might be a blessing in disguise. In hearing them now with this earlier release, I will perhaps be able to gauge how much the band has grown better. That might work out better in this case. Lets try.

Kiju seems to be more than a very good band, and this earlier recording shows a side that I like better than the newer album ("Ignite The Revolt") gave... and I loved that one. They were more of a Thrashy Crossover band on the newer one. This album is just more of a groovy sort of thrash thing. Musically, it is different than the latter release yet I can see a true and honest progression that has become between this one and "Ignite The Revolt".

Lyrics that inspire, bring humour and yet get you thinking in many ways are the mainstay on either albums, but there seems to be a more blunt message on this one. Musically, they are amazing without resorting to mind-numbing shredding and sweeping arrangements. It is what metal is suppose to be in any way.

It is official... Kiju is a band worthy of a spot in anyone music collection. They are a band that just shows not only the talent, but the sheer diversity of what metal in all of its forms have evolved into. Clearly, metal is a better genre with bands that are like this and will clearly grow as well.