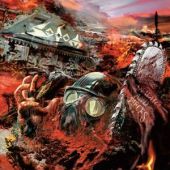 Today I have read that Tom Angelripper has fired both Bernemann and Makka. As a matter of course, Sodom are a one-man-army since the demon alcohol took control over Witchhunter (R.I.P.) and the latest development underlines this. In War and Pieces with its nice artwork also marked a turning point, because it was the last full-length with drummer Bobby. Too bad that he did not have a better farewell, because the album from 2010 falls into the "also ran" category.

The first depressing guitar notes seem to announce a mighty album. Indeed, the opening title track guarantees chills and thrills. The sinister number is crowned by an impressive chorus and was a good opener on the tour after the release of the album. However, it remains the only giant here. 'Hellfire', the second track, does not lack speed and straightness, but its configuration reminds me of the equally straight designed 'Shellfire Defense', the second song on Better Off Dead. Then as now, the track on the second position seems to have an alibi function. "Hey Angelripper, why did you record a comparatively mild album?" - "Are you kidding? Listen to the second song!" I admit that there are some further high-speed sections on In War and Pieces, for example in 'Storm Raging Up' and 'Knarrenheinz'. Nevertheless, savagery and total dedication do not characterise this work.

Instead, Sodom present a lot of mid-tempo sections and unfortunately, they are not propped up by strong riffs. Titles such as 'Nothing Counts More Than Blood' (its chorus ends catastrophically) or 'Feigned Death Throes' (miserable verses without any hooks) are almost painfully meaningless and pass by without leaving their footprints. Nothing keeps sticking in the mind. There is no dangerous, insistent barking ('Agent Orange!'), no sharp riffing ('Sodomy and Lust') and not the smallest indications of insanity (shown on all their early works). The chorus of 'Soul Contraband' with the elongated screams of Tom comes closest to the old qualities of the formation. Moreover, the entire track emphasizes the dark vibes of the album, but it is surrounded by mediocre pieces. The example to show the opposite of a great chorus is called 'The Art of Killing Poetry'. It wants to be melodic, but it sounds just vapid and powerless. No doubt, this chorus ruins the entire number, but the sense of loss is kept to a minimum in view of the other parts of the track.

All these underperforming pieces make the question of the quality of the production more or less redundant. Well, in the interests of accuracy, the three musicians (and their crew) were experienced enough to create an appropriate sound. The guitars sound punchy, Angelripper's slightly boozy and hoarse voice gives the album a familiar touch. Bobby's drums benefit from the mix as well and this was the very least he and we could expect on his final Sodom album. Thus, the output does not suffer from a weak production, but from weak songs. By the way, the title track remained the only song from the album on the concert I visited in February 2011. No wonder, if you ask me, because In War and Pieces is not bad, but it pales beside the band's really powerful albums.