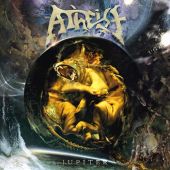 I'm going to try gloss over the band's history as quick as I can. It is somewhat necessary for context's sake, but I have no doubt you've probably heard it a jillion times before if you're reading this. Just in case you haven't: Atheist released a few tech-thrash albums in the 90s which weren't huge hits due to the somewhat inaccessible jazz fusion, but they slowly gained more and more traction in the underground over the next couple of decades to the point where their first two albums are now considered to be classics. (Their third one is a bit more divisive, as it was written during a more tumultuous time in the band's history.) Because of this newfound success and interest, the band reformed after a long hiatus and put out Jupiter. Reviews were a bit mixed, but generally people seemed pretty glad that the long-forgotten legends of thrash had finally returned.

I was born a year after Atheist released Elements so my perception of the band's history might be somewhat inaccurate, as I can only piece it together from indirect sources. I was only around to witness the rebirth of Atheist as it was happening, and because I wasn't too familiar with the band it didn't interest me all that much. A bit later on, I did get around to checking out their early work, and my opinions of their first three albums reflect the popular consensus: they're great. Atheist is challenging, technical and unique, but they don't lose the metallic bite even amidst all the wankery, because it's perhaps some of the most purposeful wankery there has ever been. I listened to Jupiter out of curiosity a handful of months ago, and while it wasn't really what I expected, there was still plenty of abrasion and complexity within a thrash template. I wasn't totally sold on it, but the potential was there. A little while later I saw it used in a CD store, and I threw caution to the wind and bought it because I felt like splurging a bit that day. That brings us to the here and now. (Shit, I just spent two paragraphs on what was supposed to be a "brief" history. My bad.)

Because of the natural density and inaccessibility of Atheist's material, I figured that this would age gracefully and further listens would reveal additional nuance and depth I had not uncovered the first few times around. Unfortunately, the inverse has proved to be true: Jupiter actually gets more grating every time I listen to it. There's some intangible about this album that just sounds...annoying. Now, keep in mind I do have a proper frame of reference here; I get that I'm not listening to Nightwish. Catchy hooks and easy groovin' isn't the point of this band, and I can understand bands using dissonant or abrasive sounds in order to create atmosphere or to garnish certain riffs. It's not like this sound is inherently displeasing to me. Jupiter, however, is catchy in all the wrong ways. This is a little bit more streamlined and repetitious than previous Atheist works, which is to be expected after a 12-year hiatus, but combine that with the dissonance and you get riffs that aren't very enjoyable, but still get stuck in your head. Sure, older Atheist had its share of wacky dissonance as well, but it was presented in a way that was a lot more aversive and required more listens to understand. Modern production values (and perhaps conscious decisions on the part of the band in light of their delayed success) have pushed all of the heavy and aggressive elements of Atheist to the foreground of Jupiter, and the result is an album that mostly tends to be memorable in its unpleasantness.

This is still clearly the same band, and much of what is displayed on Jupiter isn't anything new for Atheist. The problem with Jupiter isn't that they've added a bunch of new stuff that's unnecessary, it's that they've taken away many of the things that made them engaging. The production is much more glossy and all of the little technical frills come through very easily, but the band loses a certain special something with the more raw and organic production of their earlier albums where everything was a little bit more subdued and fighting for dominance. The bass makes a few standout appearances here and there (for example, in "Third Person"), but it sounds rather...conventional compared to the maddening playfulness that you could hear all the time on Elements. Even with all of the filler present on that album, there was still a constant back-and-forth between the guitars, and the bass got a lot more time to shine than it does on Jupiter, where it only really makes a few select appearances. This connects back to the production quality, which leaves it a bit muffled when everything else is going on. Atheist has, at least, kept up with the times and incorporated some more modern death metal influences a la Gorguts and perhaps went back and listened to their old Voivod records, too, but even then, Jupiter falls into this weird catch-22 where the more palatable riffs aren't particularly noteworthy or unique, and the more unique moments aren't really palatable or enjoyable. They're throwing a lot of different shit at the wall, but none of it really seems to stick in the same way it used to. Gone are more reserved attempts to give the album a more well-rounded atmosphere; you're not gonna hear anything like the beginning of the title track of Unquestionable Presence. Jupiter focuses a lot on the harsh, technical aspects of the band's sound, and said focus causes the riffs to lose a lot of what made them special due to a lack of balance. This still sounds like Atheist, but these slight tweaks make Jupiter sound like a mere shell of the band.

What is perhaps the most grating of everything, though, is the vocals. Again, I do have a sense of perspective here; thrash vocals aren't supposed to have perfect timbre that fits the music all the time or anything, but there's still just something about Schaefer's vocals on this album that's really, really off-putting. They worked before when they were much more subdued in actual tone and presence, while still being a little more adventurous and outlandish. That's been replaced with a lot of uninteresting sneering and moaning on Jupiter . Maybe it's the production values, maybe it's that age has sanded down a bit of the raspiness from his voice, but the vocals are borderline cringe-inducing at times, especially when they try and do the "catchy thrash chorus" thing on songs like "Fraudulent Cloth", "Live and Live Again" and "Faux King Christ". Remember how I said these songs stick in your head for all the wrong reasons? The vocals play a huge part in that.

Jupiter still sounds like an Atheist album, in spite of all its shortcomings. They're still as heady and complicated as they've always been, and who knows, maybe I just need to give this more time to fully wrap my head around what makes it good. However, the "grower" argument only works if there's something drawing me in that I want to hear more of in the first place. It's not that I don't fully understand Jupiter. I get it, and I just don't really feel like listening to it again after I hear it. I suppose this can be viewed as a respectable comeback, but at the end of the day, Jupiter just isn't...fun. If nothing else, music should be fun to listen to, and when all is said and done Atheist appear to have tried so hard to make an album that could live up to their legacy in terms of extremity, technicality and uniqueness that they forgot to just relax a little bit and make something that was pleasant.