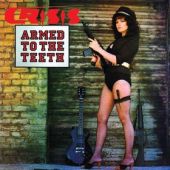 I always love hearing some old school metal. From the absurdly cheesy to the great and legendary metallic blasts from the past, it is good to see the history of metal in every form. You can learn a lot, even from a real bad band as you can from a legend, and hopefully totally escape the bad ways to do it in the process.

Cheesiness is a staple in the old school of metal, but I have to say that Crisis takes the cake on this one. One listen to this two CD (two albums on one disk, unreleased stuff on the other) set and you clearly see just how much that metal has evolved from what this release shows. The comparison feels sort of like old school is like an amoeba and today’s version are modern humans. It was a different beast, one that lad the foundations for everything we hold near and dear.

With all of that predicable riffing and severely dated lyrics this is at the same time, the best and worse in 80's metal. Even thought I know that the recordings have been transferred from the older analog system to digital, this is some of the worst recordings ever, and that includes some of the newer stuff that was recorded recently on disk two. Both CD’s boarders on being unlistenable, and made me stop many times through the listening process. Can you smell the rancid cheese curd yet?

Even for old school metal, this is really way over the top cheesy and so fucking horrible all at the same time. Taken into consideration of it being over twenty five years since most of Crisis’s material has seen the light of day, this is really, really bad stuff. It is one dimensional with not a shred of class. Even cheese needs to have a little class.

I take comfort that upon hearing this CD set, Judas Priest and all of the others true metallers would kick their asses. This is as bad as the 80's ever got and I heard Wrathchild America.

Musicianship: 5
Atmosphere: 4
Production: 3
Originality: 3 (even back then... no originality)
Overall: 3