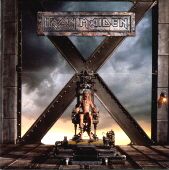 Type: Full-Length
Release Date: October 2nd, 1995
Label: Sanctuary Records
Genre: Classic, Heavy, NWOBHM
1 Sign Of The Cross
2 Lord Of The Flies
3 Man On The Edge
4 Fortunes Of War
5 Look For The Truth
6 The Aftermath
7 Judgement Of Heaven
8 Blood On The World's Hands
9 The Edge Of Darkness
10 2 A.M.
11 The Unbeliever
MetalBite on YouTube
MetalBite on YouTube

First things first: it's definitely not Blaze's guilt that I don't like this album very much. The fact is that I always divided The X Factor into two parts, the first three songs and the remaining 50 minutes. In other words, the fascinating triple strike at the beginning is followed by an actually entire album without any remarkable highlights. However, let's start chronologically with the opener.

"The Sign of the Cross" has everything that it needs to be considered as a real Maiden classic. It holds a great song structure, fascinating melodies, more than the usual opulence, well designed rhythmic changes, stimulating pictures that are created by the fantastic lyrics, dramatic sequences, an unforgettable chorus, expressive vocals and ... (please add whatever else you expect from a great song of the British institution, I am sure you will find it during these exciting 11 minutes of art). Due to the fact that I always respected Maiden without being a real fan, my personal favorites might differ from those of a true supporter, but in my humble opinion, a lot of their more famous songs from the first seven album stand in the shadow of this large-formatted opener.

"Lord of the Flies" and "Man on the Edge" do not possess this extraordinary touch, but they can rely on good guitar lines, catchy choruses and in the case of the latter on an energetic, speedy rhythm. Some dudes blamed "Lord of the Flies" for its ostensibly primitive "oooh-oooh-oooh" vocal lines, but I disagree. Maiden are famous for mastering complexity, but they also always had some straight tunes like "Running Free", "Invaders" or the phenomenal "Sanctuary" that had better things to do than to strive for complicated patterns. It always depends on the mix. So after having listened to these three tracks, I was very optimistic, and I thought that the only major flaw of The X Factor is its very repugnant artwork. Little anecdote, one of my friends, who had also bought the album, threw the booklet immediately into the bin, because he could not endure the sight of this shitty picture. Full understanding, brother!

Well, I quickly realized that the full-length had more negative surprises than only the picture of the tormented Eddie. An endless stream of vapid, relatively slow-moving songs follows "Man on the Edge". Some of them are equipped with absolutely pale and miserable choruses, for example the uninspired "Fortunes of War". Some other have at least a certain number of decent sequences ("Look for the Truth"), but a lot of comparatively soft instrumental sections kill any form of vigorous expressiveness. The longer the full-length lasts, the more it becomes clear that Maiden suffered from a strange kind of collective identity crisis - and no doctor was available. Instead of coming to the point, the guys formed overlong tracks without rhyme or reason. Tennis players would speak of "unforced errors" when listening, for instance, to parts like the senseless bass introduction of "Blood on the World's Hand". As a result, this partly dark track lacks compactness and falls through the net. But it's a general problem - too many soft sections hurt the power and the flow of an album which is simply too long and, sorry for that, predominantly boring. The production is okay, Blaze does his best and Maiden songs always have a certain substance, but the complete absence of thrilling moments during the last 50 minutes constitutes an evidence of incapacity. As much as I regret it, songs like the faceless and uninspired "2 A.M." should never have seen the light of day.

From my point of view, the first songs save this album as far as possible. Especially "The Sign of the Cross" marks an essential track for the followers of Harris and his comrades. One of his previous comrades, Blaze Bailey, has recently said in an interview with the German magazine Deaf Forever that he loves both albums, but I am sorry that I cannot share the point of view of this upstanding artist. Virtual XI is no miracle of technology, but it sounds lively and offers coherent tracks, while the here reviewed work appears as an enormous but ill-coordinated monster. Anyhow, as mentioned before, the engagement of Blaze was not the reason for the pretty weak result called The X Factor.

After ten glorious years of and fame and uncompromising epic metal mastery, the gods Iron Maiden, though weary, forge bravely onward without the familiar voice and face of Bruce Dickinson that they grew legendary with. Well, Steve Harris decided he wouldn’t let the frontman’s departure cripple and doom his very own band. A casualty of war... the battle continues without him.

War, or rather what happens after one, is the official theme of "The X Factor". A depressing concept album, more or less, on soldiers that finally come home from the terrors of war only to find that something much worse awaits them. The experience has left a scar in their conscience that runs deeper than any in body. The very moving 'Fortunes of War' relates an old veteran who’s nightmares haunt him with horrid scenes from the conflict long past and '2 A.M.', a depressing but powerful song, relates the feeling that there is nothing more to live for, life has become trivial and meaningless.

It’s for this reason that this album disappointed many old Iron Maiden fans. Too low-key: no catchy live songs; no ten-minute historical epics; no fun, and while Blaze Bayley can belt out a decent tune, he is nothing compared to Dickinson. But, being one of the younger and more inquisitive fans, I’ve come to cherish "X Factor" as much as any Maiden release. There is a very unique sort of dark and sad atmosphere created here that I can find in no other album. I see it as a solid and different release from the band and try not to look at it compared to what Iron Maiden used to be, but only as they are now. Time to look forward, the band has been reborn, though they don’t seem too happy about it.

It’s obvious that they’re not trying to catch anyone off guard with an album that opens with 'Sign of the Cross' - the slowest and longest song. 'Lord of the Flies' and 'Man on the Edge' are faster and more lively but they don’t fool anyone, the true character of the album lies in the progressive and powerful tracks like 'Fortunes of War', 'Look for the Truth' and 'The Edge of Darkness' which start off very slowly and courageously build up stronger and stronger to a magnificent anthem. The boys deliver enough songs to satisfy anyone, and among the roster are good ones as well as bad.