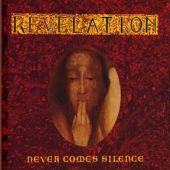 Bands that so closely sound like someone else is a real pet peeve for me. As a musician, I am heavily influenced by many bands from many stages in my life, but I intentionally steer my playing away from using riffs that could be even a little bit too close sounding like my ‘heros’. I am no shredder or some sort of guitar god by any stretch of the imagination, but I try to be original.

Revelation is a band that on the surface, sounds way too much like early and doomier side of Black Sabbath. The riffs were pretty close in spots, as was the ‘subtly set in the back of the recording’ vocals like Oz Man used on the first three classic Sab albums. Listen and learn, all of you metallic minions... and you will here a band that is like the Godfathers Of Metal, yet they still are their own musical beast.

Classy old school Doom has not sounded so remarkable as it does with Revelation and their album "Never Come Silence". Highlights on the album are chocked full and includes the ode to Ozzy of ‘Ashes’ and the band really comes into their own with the eighteen minute opus of the title track that seems to spin and twirl with eerie life like a deep night time fog over a spooky lake. This track is symphonic without all of the baggage that comes with it all. It is going for the feel rather than some sweeping arrangement.

It all reminds me of the Sabbath first album, which happens to be my favourite album from the masters. That being said, it still is way more than that. It does seem a tad dated with the sound, but it sounds so good that it does not matter. Light some candles in a dark room, lay back with a cold one in hand and let the music take you away to where things go ‘bump’ in the night. Things cannot get any better than this.