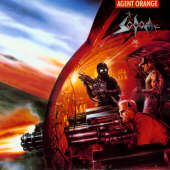 The greatest honor history can bestow is the title of peacemaker. Richard Nixon, the innocent comrade that, of course, had nothing to do with the Watergate affair, said this sentence while being at risk to suffocate in view of his own emotiveness. But he didn't make peace in Vietnam. He even didn't bring the war to a glorious end.

Thomas Such, better known as Tom Angelripper, did never speak very pathetic sentences. The dudes from his home region are usually not interested in making big words. Instead, he just released Agent Orange in cooperation with Chris Witchhunter and Frank Blackfire. Unlike Nixon, Tom brought this project to a glorious end. No doubt, today it is rather embarrassing for extreme metal bands to look for commercial success. But Sodom was the first thrash band that hit the German charts, and this was a kind of unexpected triumph and a totally new experience at the same time. It felt extremely good, because the three-piece had not modified its style. The dudes played thrash metal, less amateurish than they did on the very early outputs, but still fast and furious. To put the Vietnam War in the center of the martial lyrics was both original and generic. It quickly became clear that Sodom were in the right place at the right time. We, the positively surprised fans, studied the charts and were convinced that extreme metal had become an unstoppable force. World domination was near.

Leaving aside our feverish dreams, Agent Orange marked a milestone for Sodom, not only because of its commercial success. The occult, sometimes biblically inspired or surreal scenarios of their former lyrics did not show up anymore. The songs of the third full-length had a more realistic content and this reorientation gave the album an oppressive aura. Nevertheless, the music was still highly impressive, and it has lost nothing of its fascination to this day. From the beginning to the end, each and every track win over with its accessible, more or less conventional design. I don't speak about primitive patterns, far from it. It is rather the case that the band demonstrates its newly attained song-writing skills. Agent Orange marks the final point of the breathtaking evolution of Sodom. Clearly structured songs have replaced slightly crude noise attacks. Both approaches have their charm, but there can be doubt that Agent Orange is the masterpiece of the early Sodom.

I don't want to bore anybody with the list of my personal favorites. It is more or less identical with the song list. Only the fairly introvert "Remember the Fallen" has to struggle in order to keep up with the pace of the other songs. This can be taken literally - it is the slowest piece of the album. In addition, its riffing is solid, but relatively predictable. However, the cruelty of wars is reflected by other songs. The straight title track kicks off the album with sharp and catchy riffs while benefitting from a very charismatic vocal performance of Angelripper. He spits out the lyrics with a maximum of bitterness and this way of proceeding hits the bull's eye in view of the criminal herbicidal operations that he refers. "Magic Dragon" with its ominous beginning mirrors the fear of the soldiers before the song accelerates speed and turns into another neck breaking outburst of impulsiveness.

To avoid misunderstandings, Agent Orange is not a typical concept work. The lyrics of "Exhibition Bout" or "Incest" do not deal with the traumatic experience of the US Army in the jungle. Yet these tunes keep the level of aggression and they do it with great ease while the vocals express contempt and disgust. I cannot find a difference between the Vietnam and the non-Vietnam songs in terms of velocity, pressure or restlessness. Inter alia the flawless production guarantees a constantly powerful appearance. Commander Angelripper doesn't go into the war without a comforting amount of munitions.

Undeniably, Agent Orange has become an icon of thrash metal in its purest form. It is immune against external influences while concentrating on the essential features of the genre. Today one might call the here presented approach old fashioned, but this was state of the art thrash at the time of the album's publication. Moreover, its energizing effect is still present. Not to mention its coherence, its homogeneity and last but not least its commercial success. All these elements gave the scene important impulses and Sodom gained new fans. I don't know whether Nixon bought a copy. Honestly speaking, I fear that this old Quaker had a miserable music taste. However, rest in peace, Richie. Other politicians also failed to make peace. Syria is just one example among many.