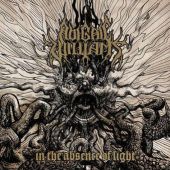 Type: Full-Length
Release Date: 2010
Label: Candlelight Records
Genre: Black, Symphonic
1 Hope The Great Betrayal
2 Final Destiny Of The Gods
3 The Mysteries That Bind The Flesh
4 Infernal Divide
5 In Death Comes The Great Silence
6 What Hells Await Me
7 An Echo In Our Legends
8 Malediction

If adversity makes any band better, US based Black Metal band Abigail Williams should be the Beatles of the metal world. They have survived a complete line up change, a change in musical directions and other personal strife that had culminated in the recording "In the Absence of Light".

A far cry from their Symphonic releases of the past ("In The Shadows Of A Thousand Suns"), Abigail Williams‘s newest album has been stripped right down to the bare bones, to a core of hauntingly cruel yet blasphemously heavy Black Metal that is sometimes diabolically kissed by sweeping symphonic elements that accent every note produced by the band - but it never takes over.

Songs like the satanic tinged giddiness of 'Hope The Great Betrayer' to the hell flame licked lyrics and strong riffing of 'The Mysteries That Bind The Flesh' show a band that is evolving in the right direction. Some might look at this sudden changes as a very bad thing and see a band that has not lived up to expectations - I disagree completely. Abigail Williams’s stripped down and heavy attacking set of songs, it seems that this band has found its demon wings and are in full flight across each level of Hades.

Naysayers have their own views on this album, that I have come across many times but my thoughts are clear. I do really like this album better than their other two releases, finding the bands new direction to be just what they needed to do. Abigail Williams just seem to be a better band for it.

Abigail Williams is well known for changing and morphing into a new form just to keep their loyal fans on their toes. “In The Absence Of Light” is no exception to the rule with a rawer, harsher, and more aggressive Black Metal style. Trimming back on the keyboards and symphonic atmosphere that the band gave to fans on their previous album, “In The Shadow Of A Thousand Suns”, Abigail Williams comes through full force and with pure rage.

The change may have been brought on by the fact that there are only three primary members now as opposed to the enormous cast that were very prominent on the first album. Ken Sorceron (vocalist/guitarist) is the only original member left but the ever-changing lineup doesn’t seem to get in the way of the band’s momentum. In fact, it seems the new members are bringing the band into a fresh direction effortlessly.

The bleak opener, 'Hope The Great Betrayal', sets the tone for the rest album and isn’t interrupted by keyboards or any sort of other interludes. Ken’s vocals come across raspy and coarse that fits in with the solemn tone perfectly. 'Final Destiny Of The Gods' clocks in at a little over eight minutes but this is eight minutes of pure Black Metal bliss with some classic guitar riffs played subtly in the background. By far, one of my favorite tracks. I myself like to escape into the Black Metal abyss for an extended amount of time but if you’re not into that kind of thing, (to each their own I suppose haaaa), there are some shorter tracks such as 'What Hell Awaits Me' and 'An Echo In Our Legends' that bring more of a mid-tempo pace to the album. What I love is that the guitar is much more present and the keyboards are not. It seemed like they were using that to bring more of a symphonic element to the last album but in actuality it became more of a crutch than anything. It’s good to see they can stand on their own without it.

No two Abigail Williams are ever going to be alike; go back and listen to their 2006 EP “Legend” and you’ll see what I’m talking about. Though they’ve never been fully embraced by the metal community, this band brings something unique and memorable to the scene. I look forward to seeing what they bring in the near future!