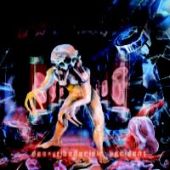 The former Soviet Block has been pumping out some momentously nasty metal since the Communists fell. It seems that these musicians go at it harder than most of the bands out there today. The former Communist satellites seem to breed music that is harsher and baleful than anywhere else. I am excited, to say the least.

Slovakia’s Typhoid explodes with some intense Brutal Death Metal that is out to fry what little brain matter you may or may not have left after all of these years of metal, and they do it rather well. Sounding like an amalgamation of bands like Suffocation, Dying Fetus, Necrophagist and Deeds Of Flesh, they hammer at you with intensely heavy and blatantly gory metal throughout this five track EP.

Three of the songs on this EP are originals, and they are pretty good, but their own originals were pretty straight forward and left me wondering what they were trying to do. Moving one, the two covers they have on here (by Dying Fetus and Autopsy) that are the better tracks they have offered up. They took these insane ‘extreme’ classic songs, and made them their own by adding in some of their own flavours. These songs were heavy and acidic in both form and function but payed respect to the original bands.

Typhoid plays some great metal, but need to work on some things when it comes to their own originals. I am not saying that these songs are bad, but they leave me with a sense that I have heard it all before. I have heard that on later releases, they did just that but on this album, they failed to impress. The EP is good, but there is nothing that really screams out for me to continue to listen.