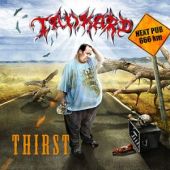 Up to now, Tankard's album no. 13 is the last one I have bought. The song fragments of the later outputs never gave me the impulse to add another work of the mostly good-humored guys to my collection. I really regret this, but there seem to be so many fantastic albums out there that there is no time to get sentimental. However, Thirst is an ambivalent long player that has to struggle in order to avoid drifting into meaninglessness. Honestly, these ten tracks do not whet the appetite for more work results of my neighbors, although Tankard did not forget to pen a small number of definitely strong pieces. Be that as it may, the question here is: what has gone wrong?

The lyrics do not play an important role in this respect. No doubt, stupid song titles like "Myevilfart" or "Sexy Feet Under" indicate blatantly that the typical Tankard joke has been told too often. Yet the band has also written some rather unusual lyrics and it is surely common sense that a good composition does not go into the ditch only because of a moronic naming. The problem is more complex. In former times, Gerre and the other beer killers were constantly bursting with energy. But their juvenile boisterousness decreased steadily over the years. God knows that they are not alone in this! Anyway, experience replaces energy and the result is another album that fails to take possession of the somewhat perplexed thrasher who sits in front of his speakers.

In rare moments it seems as if the band has not forgotten any of its once impulsive art. The explosive chorus of "G.A.L.O.W" has the power to drive a concert audience wild and the high speed verses do not lack of intensity, too. "Hyperthermia" points in the same direction while sending greetings to Finland in view of its original lyrics. But the best is yet to come. The quasi title track - look out for its hilarious video on YouTube - offers the entire range of Tankard's thrash metal approach and it does not need to be afraid of any comparison with the classics of the band. Both the melodic, almost melancholic sequences and the stormy verses release strong emotions and force the listener to do his personal expressive dance. Not to mention the chorus which connects fatalism with optimism. I know that this liaison sounds strange, but the whole song, each and every part, is simply excellent. Additionally, the lyrics combine the well-known alcohol topic with an extraordinary story about Twisted Sister (!) and the result is 100% Tankard at its best.

Unfortunately, the Hessian squadron mainly performs pretty average tracks. The opener or "Zodiac Man" fail to develop an own identity, while the integration of a children's choirs in "When Daddy Comes to Play" and the closer do not belong to the best compositional idea in the history of the band. Okay, "Zodiac Man" has a fantastic instrumental part after the chorus and the solos are fine as well. But under the bottom line, these songs do not reflect Tankard's once enormous capability in terms of song-writing. And the crummy "Myevilfart" bears its name with pride. That's definitely a pity, because the clear, aggressive sound points out that the recording budget has been well invested. In terms of professionalism, the dudes do not need any form of instruction. It is also laudable that they still or - if the truth be told - again play pure thrash. Nevertheless, the last drop of insanity is missing. Don't know what the future will bring, but at the moment, my thirst is quenched.