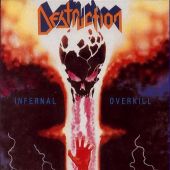 Here comes the simple recipe for a strong thrash metal album. You need at least three guys (or girls). Every one of them has to be a live wire. They do not need to be technically perfect, but they must have a master plan with a clear goal: total sonic devastation. Furthermore, it is helpful to have a talent for coherent compositions and a penchant for riffs that are sharp enough to stab the listener in the twinkling of an eye. (Of course, only in the figurative sense.) But the most important thing is the right attitude. Youthful recklessness is essential, a small portion of naivety does no harm. Back in 1985, Destruction possessed all the ingredients for this recipe. It was therefore hardly surprising that Infernal Overkill came as a real bombshell.

I readily admit that there was room for improvement. In view of the fact that Infernal Overkill marked their first full-length, it could hardly be different. At least from a present point of view, the abrasive production did not meet the highest standards. The constantly sawing guitars lacked a bit of transparency. Their slightly synthetic yet rasping sound was no reason to burst into tears, far from it. But it failed to deliver the deadly precision that ennobled the guitar sound of albums such as "Bonded by Blood". Nevertheless, the production as a whole could be considered as acceptable. I would even go so far as to say that it had its own charm. However, the song material was much better than its technical implementation. Destruction did not lack of self-confidence. They wanted to play with the big boys - and they were competent enough to survive this game. Perhaps one had to get used to the fairly shrill screams of Schmier, but they quickly became a trademark of the band. Furthermore, they have been copied a lot of times by tradition-conscious combat units such as Desaster or Obsessör.

Destruction delivered a couple of songs that had no chance to avoid their status as future classics of (German) thrash metal. The approach of the band appeared more Americanized than that of comparable Teutonic hordes. The rumbling noise of Sodom´s or Kreator´s first releases spoke a different language. Destruction did not have the natural charm of enthusiastic yet amateurish daredevils. The band offered more technical subtleties without lacking aggressiveness in any way. Although the mix suffered a bit from the afore-mentioned aspects, the riffs of highlights such as "Invincible Force" or "Bestial Invasion" showed the full potential of the three-piece. Inter alia because of their skillfully integrated tempo changes, these highly dynamic songs became prime examples of thrash metal. With regard to their raw and energizing approach, I got exactly what I wanted. Of course, the entire album was created in accordance with the purity law of thrash. Nevertheless, a few less vehement songs like the predominantly mid-paced "Antichrist" had also found a place. But as mentioned above, Destruction tapped its full potential during the high-speed tracks which were strongly flirting with the typical pieces of the American competitors. Infernal Overkill, composed and recorded by young and competent musicians, was nothing less than a tremendous full-length and a promise for the future at the same time. Better still, 30 years after its release, we know that it has aged well.

I actually enjoy this album the most out of all the Destruction releases in existence. The reason is because it's raw yet not to a severe degree, original, intense, and lyrically demonic. Not that I like demonic lyrics, but it fits the music really well. This was the original lineup--Tommy was on a few of their early releases before they moved onto Olly who played on Release From Agony and Live Without Sense. Destruction seems to be putting out albums that are just sounding the same as their predecessors. No move forward musically and their constant anti-Christian lyrics don't hit home with me. I can get into the music here on Infernal Overkill, but not lyrics.

Nothing can beat this Destruction release in their discography because it features riffs that are totally original with Mike at his absolute best in the lead department, even though I think that he still is a bit sloppy. Yes, I had this on vinyl and had been meaning to review it for quite some time now. I just haven't heard it much in a while - it's actually been ages. Most of the songs feature quite original riffs, especially those of "Thrash Attack" and "Invincible Force'. No, the production wasn't the greatest, but is a step up from their debut, which only features (I think) 5 songs. Here is about 40 minutes of intense thrash to the absolute core. These guys weren't messing around on this one and they wanted something strong.

Schmier at his best here. He's only this good on Live Without Sense, in my opinion. The bass could've been a little bit louder and the drums a bit more intense, but they still were on cue with the melodies and riffs. Outstanding every track is and put together in such a way that they defy the laws of logic! I'd say that Mike really did his part on the songwriting--totally destroys. What gets me is they copy from no other and the overall aura of the band is grim. Not really depressing, just dismal and a bit dark. This goes with the album concept, though. Their whole makeup here is deserving of recognition because they totally kick ass. This is what thrash metal should sound like - raw and uncompromising.

Tommy's drum efforts again were a little bit monotonous, but still, he was on cue for this German thrash act that totally hit the spot with me because of its totally uncompromising energy. Pick any track and you'll hear sounds like no other. Again, Mike's best lead efforts to date. He put together some solos that actually shred. Not as good as the guy they later recruited on Release From Agony, Harry Wilkens, that is. Still Mike plays his best on here, I think. Everything seems to fit together. The vocals are totally likable and original. I've never heard a thrash metal vocalist that has such of an original voice as Schmier does. That goes for all the thrash act that have been through the years.

As a 3-piece they're still pretty solid, though a 2nd guitarist seemed to fit better if they ever got someone else. However, they did on Release From Agony and Live Without Sense, but Harry left the band and Destruction of the '90s without Schmier just wasn't as good. No one could replace Schmier's vocals. On Infernal Overkill, he's totally unorthodox and unique. This used to be a band that I respected so much in the past, but now as I say they just aren't as good. They're not evolving as musicians should. They're just stuck in the dark, but with this album it captures all of what thrash is about, except for the lyrics. I like everything except those, but here is one Destruction monument.