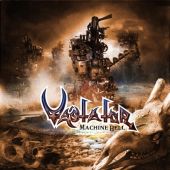 Chilean metal normally is some of the most massively savage and explosive, bringing to the table most extreme metal on the planet. There is a movement back there to the old days of metal at the moment. One band from Chile’s metallic past has come out of hiding... Vastator.

The NWOBHM is alive and well and apparently living smack dab in the heart of Chile at the time of me writing this. Sounding like Judas Priest, Iron Maiden and even Queensryche to the point of nearly being clones of this bastion of metal history. Vastator emulates every nuance of the old school to a tee, to the point you actually think you are listening to Judas Priest's "Painkiller" album on one song and then the next song reminds me of something off of Queensryche album.

Vastator is so close to the sounds of all of these influences, you have to listen very carefully. When you do, you see that these are original riffs, but they sound like they are coming from the larger bands. I even had to listen carefully to distinguish if they were rip-off riffs or not... they do sound like Judas Priest so much, but the riffs are all their own. Very slick, if you ask me. I am actually impressed.