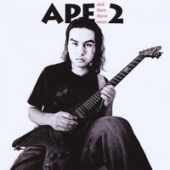 This EP is good old-fashioned Hard Rock that has a good deal of vitality and passion associated with it. The songs are structured around the guitar riffs, which are meaty and catchy simultaneously. There isn’t really a lot of playing time devoted to the three songs here, so Ape must do their best to make the tunes stand out. They manage to do so reasonably well on "...And Then There Were Two".

There is Groove to be found and some small changes of tempo that keeps the listeners interest held up. However, the amount of variety is limited and the band doesn’t have the greatest amount of room to give each track its own distinctive flair. 'Sell Out' was a very good closing track and perhaps the most interesting of what was to be found on the EP as a whole. Despite the slight lack of flair, the band will appeal to both Rock and Metal fans because it straddles the two genres without ever becoming overly involved in either. Comparisons can be made to outfits like the grunge band Alice In Chains, but even then there’s a more metallic nature to be found here than what that group delivers.

The EP is solid, though unspectacular and leaves the listener wanting a greater taste of what Ape can fully achieve. There is still some enjoyment to be had here. Ape is a good Hard Rock or Metal outfit that shows the ability to perform songs that have a strong rhythm. The songs are accessible, but are involved enough to be appreciated on a slightly higher level. There is nothing overly phenomenal to be found on "...And Then There Were Two", however, so it only gets a moderate recommendation.