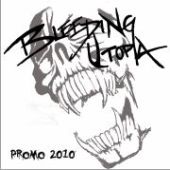 This album has both melody and hardcore elements come together for an interesting mix. The music by Bleeding Utopia is abrasive and up front in nature. It recalls the likes of At The Gates or Dark Tranquillity in its style. The music rolls along at a reasonable tempo and doesn’t really stick out or ever become overly dry either. The song 'A Life’s Decay' is a highlight with injected melody. The album closes on a good note altogether, with the last couple of tracks standing out from the pack.

The problem with the disc is that it doesn’t sound incredibly professional. There are only four tracks, they all have slightly inferior production values and the sound is limited. Thankfully the hardcore influences don’t take over too much giving the album some strength to be appreciated as a Melodic Death Metal release. It has enough groove at times to be somewhat catchy, but again nothing makes a huge impression. The biggest draws here are certainly the intensity the band portrays and the melodic vibe that shows up from time to time. There really isn’t anything to elevate the album from being average at best, however, and taking the limited playing time into account, there is definitely much room for improvement in the future.

Bleeding Utopia have some good moments, but need to bring their music to a higher level if they want to compete with bigger metal bands. Their "2010 Promo" gets progressively better which is good sign that perhaps the band will only get progressively better in the future as well. As it stands their music has highs and lows and is a mixed bag overall. It’s also hard to judge an album that’s only four songs long, so I took that into account when giving a score.