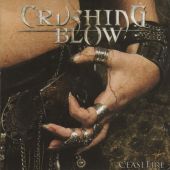 I got a question for you all. Would you like a band that sounded like a cross between the melodies of Iron Maiden, insane virtuosity of Megadeth and then all with a powerful female vocalist like Warlock (Doro) while adding in a huge splash of originality into it all? If you are nodding and raising your beer to the thought of such a band... take heed. I have the band here for you that meets that criteria and much more - France based metallists: Crushing Blow.

This is not some sort of a joke band or anything close to being cheesy or lame. Crushing Blow is a group that takes all of that good 80's metal stuff, amped it all to the maximum, added in serious amounts of talent and fun lyrics,then let it blast out. They end up sounding classic with powerful musicianship that is fuelled by this amazing vocalist that is powerful, strong and biting yet she is still very feminine.

Throughout the eleven song the album holds, you feel the passion and also the big-time fun bleed through with each riff. One track that sticks out for me is named 'My Venom'. This track is arguably the high point of the CD, and shows how massive that petite girl’s voice explodes out. It reminds me of the vocalist that was fronting Girlschool in the 80’s... only way more powerful than even that.

It is the recording values once again that hampers the quality of an album, making it sound very tinny and muddy throughout. These glaring errors take away a lot of power, yet somehow... all of that amazing music can still be gleaned out of it all, showing the band has talent to spare. If you can get over the sound of the CD I think you will enjoy the album as much as I did.