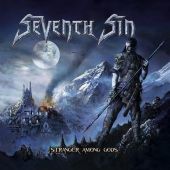 Seventh Sin is a Canadian band that has popped on the scene here seemingly from out of nowhere within the last month or so. I had been hearing some big time buzz about them through people in eastern Canada that I knew, then I got the CD right from the band themselves (off of Reverbnation.com). I was so damned excited as I put it in to play, as I hoped what I had heard was right.

At first, I was a bit puzzled with the music that was coming out of the headphones. It was sort of like this weird -yet compelling- bastard spawn of Keel, Deep Purple, a hint of Trivium while adding in some of the hair bands of the 80's that have all combined with Canada’s rock radio staples, Loverboy as well. After the shock of it, I was impressed.

The five songs here are pretty strong, and nicely written too. The bad side is that the music was little predictable, and the vocals can use some overhauling, but all of this is not bad as such. The trouble is the recording. It seemed to be rushed, and not at all well put together on the recording end of things. If they would have had taken more time, not to mention a really good producer... this could be a album that would be accessible to a whole load of different crowds.

These small problems seem to hamper the power I think Seventh Sin has at its core, but thankfully not overly. I see that they have a massively large future (with the right backing and recording help)and they are going to go far. I think they need to weasel themselves on to the next Children Of Bordom tour... they are the perfect opening act for them.