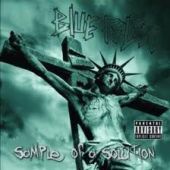 Sometimes, I think that old fashioned Hard Rock/Metal has all but vanished from the scene due to metal going to varying levels of extremes. Bands like Skid Row, Jackal and others like that have disappeared and left a deep and seemingly bottomless pit of fun. Lordi and Gwar are ones that keep some of the fun in metal but we need a band that brings that fun back for all attitude again. Enter Blue Felix...a band that tributes the old Hard Rock and Metal while bringing other styles in to make the music feel fresh.

This band is a strange sort of collection of influences, that puts it all together for a sound that is close to original as anyone can be. You have Hard Rock influence of Skid Row mixied with Disturbed powerful grooves add in stuff like a shit load of 80's metal (Overkill, early Anthrax, ect) and some Danzig, Priestess and even hints of straight forward Punk and Skate as well. You get an album of eclectic metal at its finest. They are sort of like a metallic David Bowie in the artistry and collection of different styles - and that is a complement.

The very hard to ignore sing along songs like the infectious and funny 'Dirtnap' go so well along side the face melting rough riffing like the song 'Uncle Scam'. Power, passion and pure fun go hand in hand to beat you close to senseless and then continues until you are pushed into submission. They are a new breed of grinding old fashion metal... sort of Skid Row for the new millennium.

This is a raucous, over-the-top fun loving slab of indispensable metal and it is an refreshing slab as well. They ignite the fact that metal still needs to have the fun side of things as well as the serious shit. Blue Felix is a band all of that brings that out once again while still managing to rock as hard as anyone can. This is exactly the fuel that metal is still suppose to be based on.