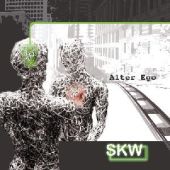 In this line of work, reviewers can become really confused with some of the bands we listen to. SKW has done just that, and I have not touched a beer before hand either. This was all about this band and their music. I need morphine just to get through this.

SKW is a band that is a whole lot of things and they are about as confusing as a dyslexic working in a road sign factory. SKW is like a very bad Red Hot Chili Peppers playing a mix of Guns ‘N’ Roses, a bizarre feeling U2 and some older form of metal. They jump between this third rate Funk/Ska music that most beginner guitarists could do while adding in some badly played metal.

Songs here are as confusing as anything and end up being so disjointed musically, it just ends up like a very bad wall of noise with no real direction other than to be as annoying as possible. It is like SKW were trying to be Meshuggah with Ska tendencies or something along those lines, and failing really badly. It made me want to turn it off more than once.

I hear a group of good musicians, too bad that they had to try their hand at some ‘fusion’ metal. I think they would be better penning some instrumental for the MUZAK corporation for playing in elevators and shopping centres. This is not really metal, and never ever should be considered to be.