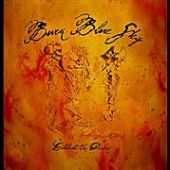 Southern Rock is perhaps one of my things that most people don’t know about me that I like. I love Skynyrd and 38 Special and Jackal. It is also true that I am not as much into Southern Rock as I am into metal, but it has been one of the constant things that I listen to, I admit it. It is when Southern Rock meets Metal on those glorious rare occasions in music history... I think I am in heaven.

Burn Blue Sky is a band that has two distinct styles playing with one another like Tequila and Lime. It is the best groove of Southern Rock meeting some down and dirty Metal. To put into perspective... it is like original Guns ‘N’ Roses mixed with equal parts Black Label Society, Lynyrd Skynyrd, ZZ Top and Stone Sour with a touch of latter Cult as well as overtones of Black Sabbath. It comes together with beer soaked genius to provide a down and dirty experience that I have not had in awhile.

Looking at the track listings, I had to smile as the songs ran though my ears. 'The City Streets' is a song that makes you headbang without spilling one drop of beer in the process while the massive metallic-blues shuffle feeling of 'Cigarettes And Friends Long Dead'. This particular song makes me think it sounds so much like what if Blues Icon Stevie Ray Vaughan would have sounded like this if he played metal. This song alone was mean, nasty and full of feeling while being a masterpiece.

This is crossover at its finest, a true crossover at that. It may not be the Punk/Metal thing that is normal with metal but this southern romping, beer swilling Blues inspired metal that is so damned good. I cant think of anything else that I could ask for anything more than this party time rock and roll. Rock And Roll at its zenith.

This is the one album to make sure your playing in the car with the windows down and as loud as you can. It will scare the people who are driving around playing rap. That is the sign of a real metal.