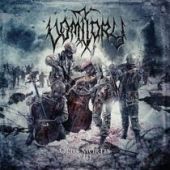 It was 2011 when the story of Vomitory came to an end. Its final chapter was called Opus Mortis VIII. To be honest, the metal scene lost a good combo, but the album also showed that the battle-hardened dudes could no longer release nearly perfect records. The brilliance of their works at the turn of the millennium remained untouched.

As always, I want to mention that death metal is not my most beloved sub-genre, because it does not leave much wiggle-room for its artists. Therefore, real fans of this metal style can add some percentage points to my rating. But it's a fact that the death metal road is very narrow and collisions with other cars happen every day. Consequently, 'Forever Damned' sounds like a late answer to Unleashed's "Before the Creation of Time", unfortunately without reaching the quality of this classic. 'Shrouded in Darkness' hails Bolt Thrower, because it offers one of these typical riffs of the British heroes: wistful, sad and powerful. Indeed, the strict guidelines of the genre make it easy to copy the approach of your stylistic neighbor.

However, Vomitory stick to their guns to the bitter end. They don't intend to break through the boundaries. It takes ten seconds until the album offers the typical droning death metal sound. After further fifteen seconds, the first blast beats come in. Deep growling and low-tuned guitars are a matter of course. Vomitory do not play death metal, they are death metal. The sound as well as the technical skills are beyond doubt and therefore only one question remains: what about the quality of the compositions?

Well, the band from Karlstad, Sweden, is too good, too dutiful and too experienced to pen total stinkers, but I miss the violent mix of excellent riffs and dynamic explosiveness which gave their best albums the special flavor. To worship the own genre by hook or by crook is one thing, but to compose killer tracks is something different. 'Hate in a Time of War' has an atmospheric, calm and promising intro that creates a short contrast, but at the end of the day, it is just another piece of bloody meat that the Scandinavians throw into the audience. Well-hung meat, more or less juicy and taste, but no culinary delight. Maybe I am just a pampered boy or the musicians themselves have set the bar too high with their early masterpieces - and these options are not mutually exclusive. But decent songs that hardly differ from each other are not enough for a former guarantor for precise, breathtaking and crudely catchy death metal.

Sometimes a band, or should I say legend, reaches the point where everything is said and done. This does not mean that it starts to release only bullshit. Opus Mortis VIII is a good output, no doubt about it. Nevertheless, predictability takes its toll and - even though hardly noticeable - the record is not immune against a slightly vapid aftertaste. And exactly this kind of aftertaste is a typical sign that a band has reached the point I have mentioned at the beginning of this paragraph. I guess the dudes of Vomitory were aware of this and so they called it a day. Sad, but no drama. Every story comes to an end one day.