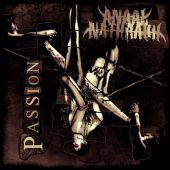 This is music that has an intensity that is almost unmatched. The almost tortured aura that the screamed vocals showcase complements the remainder of the music appropriately. The band is truly furious on this release and this alone makes them unique to the Black Metal genre. The extremity of this release may appeal to some people more than others, however, and there is definitely a slight lack of substance that shows though the flashy exterior. The songs here are impressive and well performed, but don’t have quite the impact that would make this release a truly memorable one.

"Passion" is actually one of my first exposures to this band, having heard that "In The Constellation Of The Black Widow" is more subdued than what’s to be found here. I applaud the band for the direction taken on this album and there’s a lot of enjoyment to be had, but it all seems a little shallow. A comparison can be made to candy, there’s a sweet exterior, but a sort of hollow feeling towards the inside. As one would expect, the album gets off to a thrilling start, as the track 'Violenti Non Fit Iniuria' is easily a highlight. It contains a nice respite of clean singing that recalls the likes of Emperor and offers respite to the madness.

The music here isn’t particularly melodic at most points, but it’s far from raw. Riffs are tremolo picked, but not as complex as the aforementioned Emperor can be, as there a much greater grind aspect to this band than that one. And the outfit never attempts to be symphonic or melodic, though there are some tuneful portions to be found here and there. Expect a good deal of aggression and speed and if this is to your taste, certainly give "Passion" a listen. This is certainly a very good album, but not a great one.