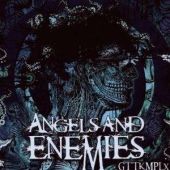 They say that imitation is a form of flattery, but that old saying irritates me so badly. To me imitation is akin to stealing. If you sound like someone to a degree, that is flattering, but if you sound so much like a certain act, it is just near stealing. With that, German based Angels And Enemies are on the docket today.

It is with a heavy heart that I need to write this review. Angels And Enemies are a very enthusiastic young band hailing from the suburbs of Germany. They are great musician and seem to really get into the music end of things, but that is where the high spots are to them. They are a total clone of bands like Canada’s Alexonfire and almost any other of the other Scream-o bands out there.

While they can really play, the lack of originality works to hide the fact that they have talent. It really is predictable in both form, music and even production. I could not find one single quality that stood out. Making this album hard to really listen to. It just feels and sounds like every last new band in the genre that is out there. They played it safe, but that just pushed the quality even further down the scale.

Angels And Enemies are a really good band, and will probably sell multitudinous CD’s because of it. I find that this is such a shame to reward bands that are wallowing in mediocrity with being seen as a viable act. It is sad... with a little ingenuity.... there will be a true band underneath the veil of that imitation. They have talent. I hope that this might get the band to use it.