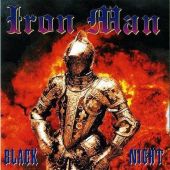 Debut albums are almost universally hard to get just right, but if you're a Black Sabbath cover band led by a badass black dude who can play any riff he hears once, then, your original songs are bound to fucking slay. Also, the guy had been playing metal for years before Maryland's Iron Man even formed, so it's no wonder as to why when Hellhound Records dropped Black Night in 1993, true doom metal had another reason to keep thriving in obscurity. The lineup executed everything perfectly, as Rob Wretched's vocals are as perfectly un-technical as Ozzy's himself and Al's guitar tone is basically like having two bassists in the band, and that's after already cranking the bass knob on each amp to 10. Iron Man is the heaviest traditional doom band bar none. Al Morris took the crunch of Black Sabbath, Pentagram, and Saint Vitus coupled with his own riffing techniques and just fucking steamrolled everyone. He's not afraid to chug, palm mute, even throw in a bit of NWOBHM riffing, and still it's doomy as all hell.

This is very, very visceral traditional doom, which is one way Scott "Wino" from Iron Man's fellow Maryland doom band The Obsessed once described the genre. It's gritty to the point of musically and lyrically portraying impoverished, wrecked homes and dilapidated street corners, untrustworthy characters everywhere. 'Choices' and 'The Liar' are a frantic plea for change, but they carry a sense of anxiety, because it's like the band knows no one gives a fuck about the problems they're singing about. In the song 'Choices', after the line "no time to turn back now!", Al plays this half-palm muted, half-power chord riff that gets my sweat rolling and heart pounding every time, since it has such a stoic character. 'The Liar' is like a hectic shuffle through crowds of selfish, bitter city folk, packing a massive doom punch, as does 'Life After Death' which is aggressive yet mournful in its verses. The slower title track and 'Vampires' feel more introspective in the sense of deep cuts from the early Trouble albums, but overall this shit is really depressing and gritty in a suck-it-up kind of way. They're carrying on through hell and back is the thing.

Even the fan-favorite 'Leaving Town' (it's got the grooviest doom riff ever!) is a bit in the ballpark of lunacy caused by loneliness. The message is quite wholesome of course, just like closer 'Why Can't You See Me?', it's really all about taking the time to have some empathy for someone other than your miserable self. 'Life's Toll' meanwhile, deals with themes of trying to fill a void within oneself, also containing some of Al's best hammer-on action in his riffing. Unorthodox's drummer is also the drummer here, and I'd say his fills are fantastic just like Bill's were in early Black Sabbath. Again, very "visceral" sound to the drumming that makes the bassy tone of the music feel iron as fuck, just like the knight on the cover. Finally, Al's soloing is more Hendrix-influenced than anyone else in metal. Clearly a man of good taste!

Black Night isn't really pleasing to listen to. It's visceral for the millionth time. It makes you confront some ugly truths about life and what a struggle it can be, but it manages to have an uplifting silver lining through it all, making it tough as iron. Definitely the embodiment of balls-out, badass classic doom fucking metal. The Passage from 1994 is also a really good Iron Man album, albeit with a different songwriting approach and slightly less solo action from Al, but bar none Black Night is basically the best album Hellhound Records, a major doom label in the 90's, ever released, along with maybe "V" by Saint Vitus, "Lunar Womb" by The Obsessed, and "Destruction Of The Void" by Count Raven, but Iron Man is way more underappreciated than most other classic true doom bands.