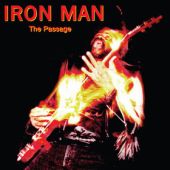 Re-released May 11, 2010 by Shadow Kingdom Records with a bonus DVD. The CD also included a bonus promo video for 'Iron Warrior' made on November 11, 1995.

"The Passage" is Iron Man's second full-length release and this re-release basically includes bonus live material from 1999, and a pretty funny promo video from the track 'Iron Warrior' (the juxtaposition of the main character in this video, some whigger kid pimping out his gun who gets shot in the end, with the rather cheesy performance of the vocalist is, I would think, humorous to most anyone, yet even so I do not think they were trying to be).

Iron Man started out as a Black Sabbath cover band in the 80s and eventually started writing original material that holds its own. Despite this they became one of those older Heavy Metal/Doom bands that have a rather skimpy record of releases (and apparently, equally skimpy audiences) with a handful of old-timers who remember them. But that doesn't really matter, does it? "The Passage" is a solid album- well-composed with catchy riffs, charismatic vocals, good drumming, with few areas of stagnancy.

A must for Iron Man diehards and a maybe for old doomsters and Sabbath fans. If you want to solidify your Doom back catalog and don't have this you may want to get your hands on it, fo sho.