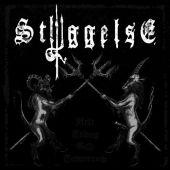 I haven't listened to Black Metal in a long while because I was dying of boredom, but Styggelse has been the antidote!

Spunky, crusty, energetic, and raw, the band's full-length debut was a pleasure almost all the way through. Naturally there are several "recognizable" styles in the music but no doubt Styggelse has a solid idea of who they are and no one else sounds just like them (even though there were several times it sounded very much like newer Horna...). The band name fits the sound well, and the sound fits the music well.

"Heir Today- God Tomorrow" is a collection of well-composed songs suspended in a dirty recording with that grungy basement-show feeling, complete with phlegmy vocals on top. The drums are... "fucking awesome"?! Almost like a less "machine-like" version of 1349's drumming especially on the fill-ins. Can we say, "PLEASURE"??? This is heavy stuff, though I can personally do without the "Swedish"-style Black Metal riffing completely.

If you have grown weary and lifeless from listening to lipstick-wearing Black Metal bands, and found that your dick has fallen off and your balls have shrunken to the size of peanuts, try this one. It is sure to recharge your battery (or, your balls). Styggelse is Sweden's unofficial answer to the nation's dreaded "gay" stereotype, and the best thing to have ever come from Eskilstuna!!!