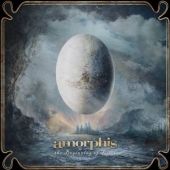 With early death metal origins, an increased presence of folk and rock influences later on and more, Amorphis have never been an easy band to assign a single genre to. Nowadays they straddle a very strange line between prog metal, folk rock and melodeath, a niche that they've explored and refined over the last fifteen years since the introduction of Tomi Joutsen. Today I will review what might just be the pinnacle of this era and arguably even Amorphis overall.

I consider Silent Waters, Skyforger and The Beginning of Times something of a trilogy in Amorphis' discography, each being a concept album that deals with one of the three main characters in the Kalevala, the Finnish national epic. Both the preceding albums are amazing in their own right, with Silent Waters telling the stories of Lemminkäinen and Skyforger dealing with the great blacksmith Ilmarinen. But The Beginning of Times is on its own level entirely, where breathtaking storytelling, mystic melodies and Amorphis' magical composition converge to create a near-perfect experience.

The third instalment of the trilogy tells the tale of the great bard Väinämöinen, and the atmosphere is impeccable. The focus of the album is on wondrous, folky keyboard lines with very few overtly epic moments, but then again the Kalevala is not an epic text. Sure, magical duels, celestial wars and visits to the underworld are commonplace, but the book's true soul is in its poetic beauty and storytelling, reflected well by the sweet, flowing motifs that make up a large part of the experience.

The cynosure of the record is, without a doubt, Tomi Joutsen. His true versatility is not even on display here, but once again that's because it doesn't have to be. The desperate, harrowed side of him isn't necessary (although if you want to hear a man with such a powerful voice sound like he's about to collapse on the floor in tears I heartily recommend Hallatar), leaving just his storytelling mode. I don't think there's anyone else who could better represent a Bard with the power to infuse his songs with magic - his clean singing is even more passionate than ever before while he reserves his forceful growls for the more thematically intense sections such as Väinämoinën's rage in 'My Enemy'.

The album overall is a very logical progression from Skyforger, comprised mostly of simple, anthemic melodic rock songs such as 'Mermaid' and 'You I Need', which serve the atmosphere well with catchy riffs, powerful, memorable choruses and guitar solos aplenty, never overly technical but always emotionally resonant. But The Beginning of Times is at its best when it's combining those joyous leads with more complex, ambitious structures that give a true sense of progression and storytelling. This occurs most notably in 'Song of the Sage', which is really a convergence of every single element that makes the album great and more - it sets the scene with soaring twin melodic lines from a guitar and flute, both coming together for one of the most evocative choruses on the album. The duality between the instruments is perfectly reintegrated later on in a series of atmospheric solos - it's quite a simple concept but Amorphis execute it to perfection, squeezing every last drop of raw beauty they can out of each and every melody they write.

And that is, to me, the best way to describe this album. It's a series of very simple ideas taken to their very limits and executed to sheer perfection. The band aren't reinventing the wheel in terms of any particular songwriting devices, but there's still a characteristic individuality in the unorthodox blend of genres they present. Every moment is brimming with passion, imagination and sheer artistic vision and the result is captivating.

In the end, The Beginning of Times is a near flawless album that I have just one complaint about. There's a singular point around the middle of 'On a Stranded Shore' where I begin to feel it's overstaying it's welcome. It happens on every listen without fail, but fortunately Amorphis have always managed to recapture my attention with the beginning of 'Crack in a Stone' (a song that introduces yet another new element with a beautiful integration of choirs). However, just for that one small moment where the inclusion of 'On a Stranded Shore' begins to feel unnecessary, I'm forced to deduct a single point from the album. Ultimately though, this one little blemish is nothing compared to the creativity the rest of the album oozes. It manages to be distinctly Finnish in atmosphere even while defying the melancholic conventions of the band's contemporaries, and while the core ideas behind the music remain the same for the whole duration the subtleties and details are constantly shifting which keeps the experience fresh and memorable. With each track we're introduced to a new mood, a new story, a new landscape to be explored, and that is what makes The Beginning of Times such an incredible record. This is Amorphis at their peak.