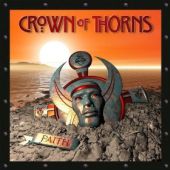 There is so much bad Hard Rock out there, I have ended up being very jaded when seeing it come across my desk. I had not heard a really solid Hard Rock album since Robot Lords Of Tokyo kicked my ass really good. So much copying and really bad production has put me off of the genre for a long time. Will Crown Of Thorns album simply titled "Faith" be the thing that is needed to get me back into the hard rock way again?

Having one of my all time favourite people in this band made me a little more excited (Jean Beauvoir, of The Plasmatics) at the process of listening to this album. I was not disappointed. Crown Of Thorns is not heavy like The Plasmatics were, but they are a exceptional band that rocks hard while giving you a lesson in what a band can really do when people put there heart into it.

Songs like the title track and the strong lyrics of 'Rock Ready' are mid tempo rockers that you quickly find yourself singing along to. Sadly...there are tracks that are just not as good as most of them, even though they still have a life of their own. The whole album has these shifting sides to it, but then another great track will pop up and get you into it again. All of this does make it a little hard to listen to, but it is hard to ignore that this band is very good. The veteran rockers are showing the younger bands just how to do it..

Despite the up and down way the album is in those spots, "Faith" is still is a very strong Hard Rock album. Jean and the boys should be proud. And I will be waiting for the next album to appear on my desk. I only hope Crown Of Thorns will travel up here to Canada- all of the fans here will eat’ em up.