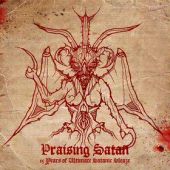 With the explosion of Black Metal all over the world, we as metalheads are looking for those few bands that truly do stand out in the genre - hoping to find that one singular band that makes your soul jump out of our weak and very fallible mortal bodies to praise Satan over and over again. Out of the hellish mists and fire strewn paths, comes the Netherlands spawned Heretic.

Heretic has been around for awhile (since 1995) and has been a unseen force until now. With blasphemous lyrics and malefic brutal riffing, pummelling drums and venom spitting vocals that seem to burn the ears of religious leaders all over... Heretic embodies all of this with their career spanning collection aptly titled "Praising Satan - 15 Years Of Ultimate Satanic Sleaze ". I had not heard much of this bands music before this, so getting this sort of ‘best of’ album was the best thing I could have gotten.

With 13 songs that seem to span most of their career up to date, it would be stupid to pick only a few songs to highlight on this album to express what this band does. Doing an overview would work here and dispense the wordy prattle. The overview is that Heretic give birth to some powerful Black Metal that seems to stoke the brimstone flames and make the Harpies at Hell’s gate dance. Strong songs and very larger than life music are what they bring, and they use all of that so effectively.

I am enthralled with the powerfully strong music that Heretic brings, and they seemed to get stronger and better with each album (listened to most of the cd’s all from a friend of mine). I have found my Black Metal muse. All hail Satan and his minions... after hearing this album - who needs Jesus?