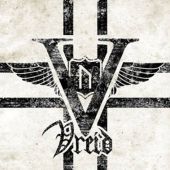 Type: Full-Length
Release Date: 2011
Label: Indie Recordings
Genre: Black, Melodic
1 Arche
2 The Blood Eagle
3 Wolverine Bastards
4 The Sound Of The River
5 Fire On The Mountain
6 The Others And The Look
7 Slave
8 Welcome To The Asylum
9 Then We Die

The music of Vreid, an outfit formed by members of the band Windir, contains the ravaging aggression of many Black Metal bands, but balances this out with moody atmospherics that easily raise the act above most bands of the genre. The songs have a jagged rhythm section that often recalls the likes of Dissection combined with a lot of tempo and heaviness shifts, as can be readily seen from the opener 'Arche'. There are also several moments for the listener to catch their breath as a moment of abrasiveness is often changed quickly to a quiet introspective one in seamless fashion. When the riffs are emphasized, they are stylishly done and stand out in the forefront.

Another comparison to make with the band is with both Emperor and Ihsahn, as similarly busy soundscapes are created that feature vocals that are very much like the atypical style of Ihsahn. This album was really an unexpected treat for me and ended up being a more adventurous and atmosphere-heavy release than I had expected. It’s not perfect, however. The sound of the band isn’t incredibly professional, though it is solid and this is seen from tracks like 'Welcome To The Asylum', which are a bit raw for my tastes. The band is also hard to pin an identifiable sound upon, as they vary their style almost too much throughout the length of "V".

Still, I was thoroughly surprised by the quality of the release and it stacks up favourably to almost anything that’s been released in 2011 thus far. Fans of all types of Black Metal will find something to appreciate on this quality album. If Vreid continue to embrace aspects of their music such as the strong sense of melody and variation, they will be a force to be reckoned with in the future.

Rising from the ashes of the band Windir after the death of frontman, Valfar, Norwegian metallers Vreid (Norwegian word for wrath) have a combined an interesting mixture of Black Metal and Rock And Roll. This Black And Roll brigade includes members Sture on vocals and guitar, Strom on guitar, Hvalle on bass and Steingrim on drums.

The rawness of Sture’s Black Metal vocals mixed with classic guitar riffs along the lines of old Metallica or Sepultura definitely works together nicely. Something like this, Black Metal combined with eighties metal, I would consider to be rather cheesy but the tracks are dark and heavy and carry a considerable amount of power. The first track 'Arche' begins with some heavy riffing that’s supplies a nice groove backed by Steingrim’s intense drumming. Strom’s vocals are absolutely venomous and the guitar solo is very prominent carrying nice melody with it. 'The Blood Eagle' was a little disappointing in the fact that it carried a typical rhythm that I’ve heard on plenty of metal albums in the past, nothing here really that stood out to me. 'Wolverine Bastards' throws you into the pit with vicious blastbeats and shredding guitar that keeps going at breakneck speed until a couple minutes in where it’s broken up by a melodic solo and then throws you right back in. 'Fire On The Mountain' contains more classic guitar shredding and ripping solo but the only thing that’s worrying me here is repetitiveness, there’s nothing really that differentiates one track from the other. It’s all incredibly talented but I want something that’s going to make me stand up and notice and so far it’s not doing it for me. 'Slave' is the only one that changes up the album by slowing down a bit to a nice groove and you can hear some of Sture’s cleaner vocals. The closer 'Then We Die' finishes with haunting guitar and melody supported with Sture’s dark lyrics.

“V” is a decent album that shows a lot of promise. What they lack in variety, which is something that can always be worked on in the future, Vreid more than makes up in talent.