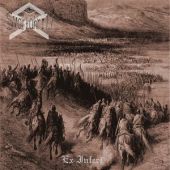 From the cold, wind swept crags and snow covered peaks of Norway, Black Metal has been coming over to this side of the world.... and we thank them for it. From the birthplace of the blackest of the black metal country, comes Pagan Black Metallers Svartahrid

Formed back when the genre began to grow and take over the metal landscape all over the globe from it’s Scandinavian stronghold, Svartahrid shows the way to Satan’s cold and merciless heart. The band was once known for breaking into a crematory and defiling a few bodies waiting to be put into the ovens.... are one of the major forces in the Norwegian BM scene.

Mixing complex melody with the bombastic and very caustic attack of classic Norwegian Black Metal Svartahrid commands respect from the moment you pressed the play button. From the nasty opening of the album, 'Cursed Seeds Of The Nazarene' to the cruel attack of 'Fire Hate Kill' and the sadistic Pagan nastiness of 'Veil Of Lies'... this is some of the best old school Black Metal around.

They may not be breaking any new ground, but this band still plays some of the best darkness infused metal around. They command respect, and have earned that right... all while they plot the destruction of anyone in their way.