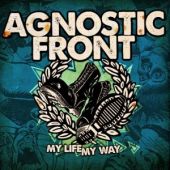 Agnostic Front is a band who have truly broken ground for Hardcore Metal/Punk scene and changed the face of music throughout their 25 year long career. “United Blood” and “Victim In Blood” are what started it all and had a huge hand in the Hardcore genre itself. Even through personal problems and lineup changes, Agnostic Front has managed to stay true to their sound and their roots which have kept them a fan favorite since day one.

Now with the highly anticipated release since 2007’s “Warriors”, these guys have shown they still don’t need to change for anyone and never will. I will admit that I’ve never been a fan of the Hardcore scene but I did grow up in the Punk (as well as Metal of course) scene and I really like the heavy Punk influence that comes out strong on their opener 'City Street'. The self-titled track comes through powerfully with Roger Miret’s unique vocals and strong chorus shouts and Vinnie Stigma’s guitar style reminds me of an old-school version of Bad Religion. 'That’s Life' comes crashing through with thrashing drums and a D.R.I-like tempo that fits with the vocals really well. They definitely know how to mix old Punk and Hardcore together.

The main thing is that this album is very repetitive which is unfortunately a common problem for a lot of Hardcore bands. There are not many tempo changes and after awhile one song starts to just bleed right into the next. Not one song is truly memorable, which is the main thing I need for it to be a decent album. It is a fun album to give a listen to once or twice, if that’s something you’re looking for then I say you should give “My Life My Way” a shot!