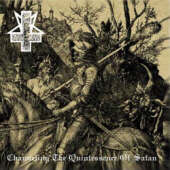 Abigor’s style is indeed one that takes getting used to. The multiple layers of tinny guitars over weak bass and just about the most complex drumming I’ve ever heard in my life got mixed reactions from me at first listen. At first impression, this was total chaos, sure a heavy, chugging riff or two could get distinguished but majority of it was complex, trilled guitarwork that doesn’t qualify as either lead or riff.

The drummer knows what he’s doing, for sure. The drums are so complex it’s unbelievable, I can’t help but think that he does all the tracks right in the studio as improvisation, and then they just record his best try. Abigor don’t play live so they can pretty much make their music as complex and difficult as they want. Record it once in the studio and you don’t have to worry about it anymore. Even for improv., the drummer shows immense talent, and he knows how to get your head bobbing. After a minute of hyper speed blast-beats you kind of get lost in the confusion, and only then does he slow down and deliver a nice, pounding beat under heavy, crunchy guitars.

Abigor’s studio and production has definitely improved this time. They seemed to have had enough time to get everything done right. Three guitar layers don’t leave any holes in the music and actually create a natural wall of sound, which means that ear damage -will- result if played too loud on earphones. There’s plenty of sound effects and synths here, but only on the intro’s or outro’s, since they don’t want to start getting blamed for using sound effects to create feeling in their songs.

This is my prime example of extreme music. It’s black metal pushed to it’s absolute peak of complexity. The last song, 'Pandora’s Miasmic Breath' is definitely the best. Catchiest drumwork (especially in the outro!), heaviest guitars. Just awesome, but the songs in the middle get a little boring to sit through and don’t offer much innovation, just the absolute complexity and inaccessibility that may one day be fully explored and understood by someone.

Bottom Line: Dark, obscure, cryptic, complex music that will be understood and appreciated by only a few.