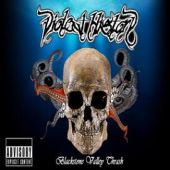 Getting to hear a band I had not ever heard of is truly a rush of endorphins to my soul. I live, breath and eat metal... and to get to hear a new act is almost better than sex. Rhode Island product Violent History is one of those bands that I have heard nothing about going into it... and that I have barely investigated.

This RI band is a trio that hands you some very primitive Thrash with hints of Death Metal and a slice or two of Hardcore. They are fast, raw and unrefined in all aspects of their music... and that alone might say great. I’m going to let you think that way for a second - then expose this band for what it really is.

This two song EP is really raw and faster than a Humming Bird on amphetamines and expresso... that alone says nothing. With recording productions akin to listening to some fat guy in the bathroom stall next to you fighting with twenty day old constipation, and all of the originality of that turd
he passed - the smell reminds me of this album as well (Yuck). Violent History takes a stab at being a good band, and never leaves home to do it. Bad songwriting, crude recording, uninspired riffs and no imagination whatsoever gives this trio no chance at all to be even a mediocre band.

I love rawness and unrestrained music, but I do look for talent and other things as well. Violent History is one band that needs to be ignored, and payed off to never play ever again. Lacking in every category that makes a metal band good - a new career might be in order for these three guys. The Cheesecake Factory might be looking for a few good dishwashers for their places. Think about it... it just might be the best thing you can do for metal.