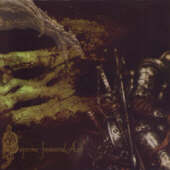 Here we have another chapter of the book “Abigor – how a band sank into the swamp of mediocrity”. The material of Supreme Immortal Art, what an embarrassing title, is neither fish nor fowl. I will explain why but at first let’s say some words about the production. It lacks depth, atmosphere and heaviness. The album sounds pretty strange, like the crippled brother of Verwüstung / Invoke the Dark Age. Sometimes the drums are completely in the background and, even worse, sometimes hardly audible. A relatively thin guitar is the most characterizing feature of the material. Occasionally, it is accompanied by gloomy keyboards, but even this instrument, usually responsible for the creation of atmosphere, fails. Thus, parts that draw the listener into the album do not often occur. The first tones of 'Soil of Souls' are promising, but the song suffers from its own diversity. Abigor show that they are not able to handle any degree of complexity – and now I come back to the material itself.

Regardless of their respective quality, the single parts of songs like the title track do not shape a coherent song. The overarching theme is missing. Abigor are meticulous about details, but they have lost sight of the big picture. Manual errors exacerbate the situation. For example, the keyboard lines of the opener stray around like a swarm of disoriented bees. All these defects make it hardly possible to identify the strengths of Abigor. They are striving for individuality and they are pretty successful in doing so. It’s no unparalleled sound, because it has an interface with the music of bands like Limbonic Art. However, Abigor try to present the Austrian way of black metal and do not copy the icy guitar leads or further trademarks from the top of Europe. Even the pretty ordinary, guttural vocals attempt to distance themselves from the Scandinavian role models by adding a few German lines.

I wish I could write something about the highlights of the full-length, but the entire material remains on a non-exciting level. All songs are more or less acceptable and they have decent moments every now and then, but after all, the album just passes by without leaving its footprint and, frankly speaking, without enriching the scene. Slightly too progressive, just listen to the dissonant instrumental part of 'Magic Glas Monument', and definitely not equipped with an adequate production, the album is doomed to failure. So much substance, but no idea how to make good use of it – it’s a pity. In all fairness, I am glad to see that other reviews for Supreme Immortal Art are much more positive, because I appreciate the stamina and the individuality of the band. However, my copy gathers dust on the shelf.